Christian Women in the Middle Ages

A french mystic, activist, and author, Marguerite's Porete’s life and the drama surrounding her death provides us with a fascinating study of the life and mission of faithful women of the middle ages. Marguerite was a Beguine, a member of a religous movement remembered today as one of the first organized feminist efforts in history. Marguerite’s book, The Mirror of Simple Souls, re-discovered with a fresh appreciation in the 20th century, has been recognized as one of the most important books of theology that has survived from the Middle Ages. It was banned by church authorities at the height of its popularity and it was ordered that all copies be destroyed however it still persisted in circulating among mystics and beguines. Marguerite’s refusal to reject her ideas in her book, centered around the concept of God’s agape love and the concept of annihilation of the soul led to her execution and label as a heretic by the Catholic church.

The Beguine movement is one that is not as well known as it should be for its impact on the church and women’s history. Beguines spread across Europe in the 13th and 14th centuries and provided opportunities for women to take control of their lives by dedicating themselves to the things they valued such as God, mission, and care for the sick in a culture that often demanded their submission in other ways. Beguine life provided a third way as an alternative to marriage and childbirth or becoming a nun in the Catholic church. Beguine convents were located in urban areas next to hospitals where the greatest social needs were present. Most beguinages were located in northern France, Germany and Belgium. Beguines dedicated themselves to a monastic life, valued simplicity, and supported themselves by working in the textile industry, agriculture, candle making, recopying manuscripts and even teaching.[1]

Despite their works of charity, the church was skeptical and deeply disapproved of the activity of the Beguines. The idea of unmarried, uncloistered women threatened the social order and frustrated the church due to their lack of oversight.[2] The Beguine movement was intentionally flexible and each order functioned independently to meet the unique needs of the locations where they were established, echoing the apostolic spirit of urban church planting today.

Beguines were frequently called upon during pandemics to care for the sick and the dying. They opened up hospitals and care centers for those in need and some even gave their lives in this service, after falling ill themselves.[3] At the core of their faith was deep devotion to God and the practice of pursuing perfection through regular prayer, asceticism, mystical research and monastic-influenced practices.[4] To risk one’s life and to suffer with those who are suffering the most was the highest calling and fulfillment to one's soul, one that mirrored the life of Jesus.

A Mirror of Simple Souls

A text once thought to be lost, but rediscovered by Romana Guarnierii in 1946, The Mirror of Simple Souls became known once again, (after being ascribed false authorship), as the work of Marguerite Porete and is now considered a spiritual classic. This discovery has led scholars to embrace further study of Porete’s contributions to theology.[5] At the time of its creation, Mirror of Simple Souls was instantly polarizing and caused significant distress both politically and in the church by the influence it began to have on women. Margurite’s unapologetic tone of authority, her gender, and her affiliation with the Beguine movement were all threats to the church establishment and political rule which caused her to be imprisoned after refusing to stop furthering her ideas. At the time Marguerite was writing, women were not allowed to develop their own theological ideas and were not considered qualified to teach by the church, however, women found a loophole where they were allowed to teach their own personal visions.[6] It is through his alternative that Marguerite and other female mystics were able to record and legally circulate their ideas. However this was not enough for Marguerite, as she was made an example by being tried by the Dominican inquisitor of France and burned at the stake on June 1, 1310. A year after her death, the Council of Vienne condemned the work of the Beguines as well as the Free Spirit Movement with which they were associated. After this the Beguines drastically declined although some persisted until the 20th century.[7]

In The Mirror of Simple Souls, Marguerite speaks of the “mysticism of essence”, the act of  becoming on earth what we are in God’s vision of us. The idea is that with correct discipline and prayer, one can become almost perfect and similar to God if the ego can be destroyed, making room for perfect agape love to take over. A near impossible task and a threatening idea to those who were official leaders in the church. Termed “the annihilation of the soul”, Marguerite explained that “a soul annihilated in the love of the creator could, and should, grant to nature all that it desires.[8] This alarmed church authorities, who misunderstood her intentions and claimed that her view suggested people could achieve God-like status, and therefore diminished the need for the church’s sacraments, authority, and rules.

Marguerite's near dissapearance in history

The lack of awareness and appreciation of Marguerite as the author of The Mirror of Simple Souls in history is a reminder that women’s contributions to theology and to Christian faith have always been significant, however they have often been forgotten. We are in the midst of a growing realization that women’s stories, contributions, and ideas have been made invisible throughout history and we collectively need to work to correct this.

“Today no less than in the 14th century, women in all religions struggle to make themselves heard. Great mystics and martyrs such as Porete remind us that we women are part of a long tradition of theology in a different voice. As another beguine, Metchild of Magdeburg, wrote, ‘No one can burn the truth’.”[9]

Beguines as leaders in crisis

Although we are culturally far removed from many of the realities of Marguerite's time, we can embrace the servant spirit of the Beguines, valuing others over self and transcendence over achievement. Their example of solidarity with the suffering and embrace of simplicity to cultivate a life of closeness with God can be valuable for us today as we have slowed down as a culture.

As we are wading into unfamiliar waters with this COVID-19 pandemic, and our immediate future feels more uncertain, we can trust that none of this is new to God, and there have always been people who have trusted God in extreme circumstances, showed up, sacrificed, loved and gave their service to those most in need.

Countless heroines of Christianity have served and loved during crisis in history, especially during pandemics. Most of these women remain unknown and unnamed. Marguerite is just an example of the thousands of women who have quietly served and loved, embracing life as the hands and feet of Jesus, often in dangerous and uncertain circumstances. My hope and prayer is that her story would be a reminder and encouragement that we are not alone today. Women and men both have come before us with open hands and with faith and have been used agents of the healing and comfort that Jesus offers.

I have chosen to depict Marguerite here toward the end of her life. She was imprisoned in 1309 and died in 1310 when she was 60 years old. Her contributions to women’s thought and what could be considered “feminist theology” of her time, recorded in her book, cost her her life but left us with a full picture of the piousness, courage and love the Beguine’s had for God. Her courage and teaching has encouraged and furthered Chrisitanity and women’s spirituality throughout the ages. The cool color palette and tiled triangles in the background symbolize the reflection, repetition, solidarity and intentionality of the Beguines and of the message behind The Mirror of Simple Souls. 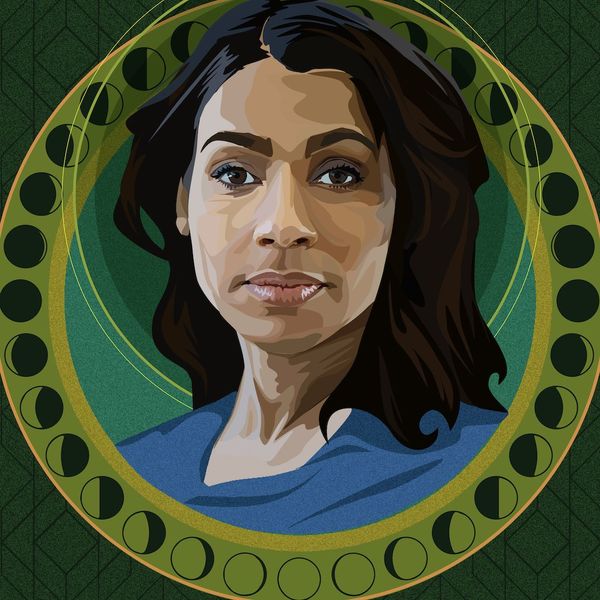 I’m introducing our sister Phoebe to you, who is a servant of the church in Cenchreae. Welcome her in the Lord in a way that is worthy of God’s people, and give her whatever she needs from you, because she herself has been a sponsor of many people, 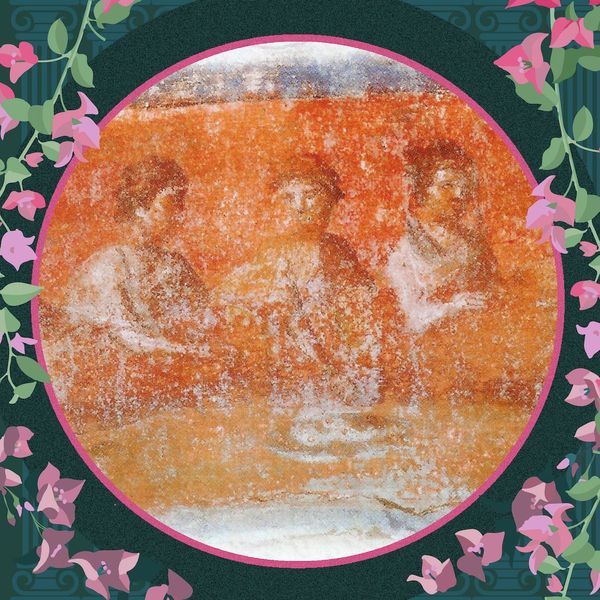 Women have made an incredible contribution to the history of the church, however many of the stories of women have not been recorded or their impact has been lost to history. We have bits and pieces of some stories, and occasionally new evidence and insights will surface bringing excitement about 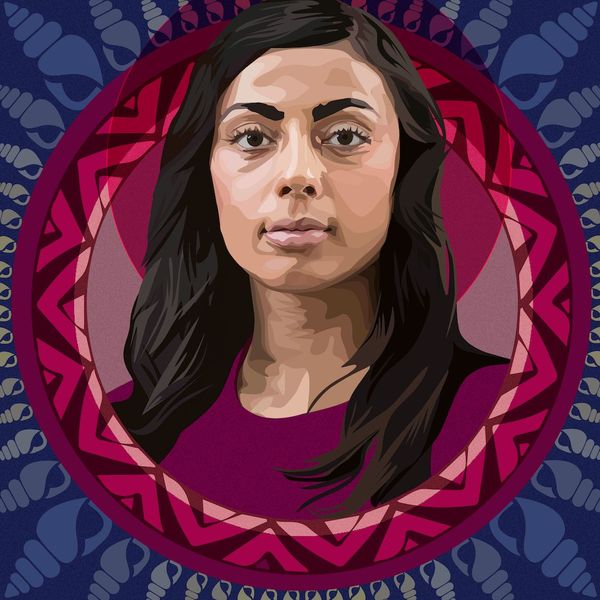 11 We sailed from Troas straight for Samothrace and came to Neapolis the following day. 12 From there we went to Philippi, a city of Macedonia’s first district and a Roman colony. We stayed in that city several days.13 On the Sabbath we went outside the city gate